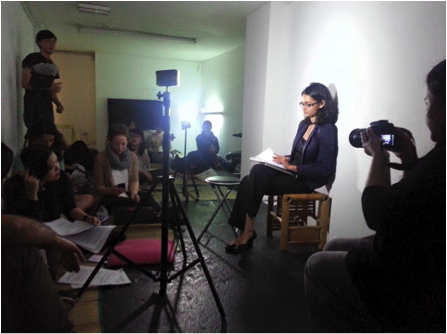 Jess Heritage works primarily with performative attempts to articulate that which exists at the edge of language. Her performances embody the futile effort to define that which slips, the ‘something like this, but not this’ as a Sisyphean labour of searching, of failing to see, of searching again and again and again.’

Michael Taiwo is a London based multi-disciplinary artist who focuses on questioning the role of race in the perception of identity and challenging the conventions of gender roles through spoken word and movement based works. His works combine elements of vulnerability and sentiment to create narratives that capture tender moments in their rawest form.

Continuing on from her other projects which have explored the movement of ideas, people and things, Erika will be facilitating a discussion using re-enactments of the archived documents of Southeast Asian live art practices, to focus on context, authorship, spectatorship in relation to archives, documentation and performativity. Working with the format of a crit, Hammad Nasar will be invited as a guest tutor; the audience participatory discussants; and a number of artists whose work focuses on performance, but whose specificities place them outside of and possibly ignorant of the contexts and practices held within this current collection of material from Southeast Asia will re-enact selected works based on the documentation available to them through the archive. Further documentation will take place during the event, and this will be lodged alongside the original material in the archive.